I have been using your Confluence since 2007 and the ease of it was just a joy. Ok, it had its shortcomings, but I could live with them, they didn't annoy me. Confluence, you were easy to learn, you were just a plain text editor, you had enough room for easy customizations. All this made that I could focus on my job, which happens to be technical writing in software companies. My last version I worked with was 3.5, but then came August 2013.
In that month I started at a new company where they use a 5.x version. Now one (yes only ONE) month later and you make me already sick.

I suppose that the function of the new interface is to be more user-friendly than a plain text editor. I have to admit, inserting macros is a step forward, same for inserting warnings, tips, notes,...  BUT, what the hell have you been doing with lists? To insert or add a numbered item to an existing numbered list, you have to be a magician. Luckily CTRL-Z does work in your editor.
And why can't I use a bulleted list in for example a warning block, when this block is in a numbered list? Can you give me an explanation for that?

Table of contents macro, maybe it's not your fault, but why do you use different styles? A table of contents is supposed to have a consistent layout, but why some items are in bold, others in a large font-size and some others in smaller font-size, I really don't see the benefit of it.

Apart from my aforementioned vexations, I have a last one to mention. When you create a PDF of a space, the links in the PDF document refer to the online documentation, whereas in 3.5 and earlier versions, they referred to the page inside the PDF. Did this function moved to more comfy places, is it playing trollface, ... You were in there and now you're gone, how hard can it be to get it back?
This bug is reported 721 days ago (27 September 2011, yes that's almost TWO years). It surprises me that you do go to the selected section when you click an item in the table of contents. So where's the difference? I don't see any so just FIX IT, and if you can't fix it, FIX HARDER!

I can't get the idea out of my head that you, Atlassian, are becoming like that other well-known tech giant, founded by Bill Gates. That company too is very good at ditching good parts of software, creating new versions that annoys people, and not listening to their customers.

Perhaps our annual fee is just 0,00000005% of your annual turnover, which makes us just a 'no-influence-at-all' company for you, but I just don't care. Perhaps that some day I will embrace you again with love and care, but right now, I'm ditching you.

Sincerely
Posted by Unknown at 11:13 No comments:

I recently started working on MacBook Pro, you have to try it all. In the past I had Windows and Ubuntu, so now the time has come to try OS X. Just like every other OS, OS X also has annoyances, of which iTunes is one of my biggest annoyance. Did they replace that team already? Unfortunately you sometimes need it, so I can't get rid of it.

As default music player I now try Songbird and added the keyboard shortcut add-on, which works perfectly. But the downside is that every time you hit a music key (next, previous, play/pause), it also launches iTunes.

The easiest way to get rid of this behavior was nicely noted in the following post:

Basically, you just need to execute: 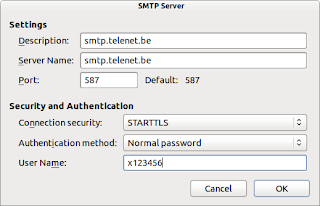 How to close xml tags easily in VIM

From ViM 7.3 onwards, most of the common programming languages are supported (/usr/share/vim/vim73/autoload/...). To make them work automatically, update your vimrc with:

Lately my galaxy s3 mini phone was not detected through USB. This is quite annoying... to say the least.

I thought a reboot of my phone would solve the problem, but guess what, it didn't.
I checked the cable, used different ports on my pc and other computers, used different cables, nothing worked, it only started to charge the battery.

I own this phone for only a couple of weeks, so perhaps this thing needed a repair under guarantee. But of course this would take weeks before having it back, so I called my best friend as help.

Google offered me this link http://android.stackexchange.com/questions/35313/unable-to-connect-galaxy-s3-to-pc-via-usb

Most of the links referred to Windows drivers but I'm not a Windows user. However, scrolling down led me to a very simple solution:

and select PDA in both sections. Reset phone and that's it.

Credits to the user "eidolon" from Australia.

The only thing is that I don't know how I got in this situation... but at least now I know how to solve it.
Posted by Unknown at 09:30 5 comments: